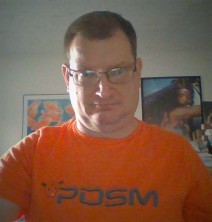 So in the months I’ve been part of the POSM team, I’ve helped re-do their website content, I’ve drafted a few blogs (on stand-by waiting for a big blog launch coming soon) and also created several drafts of their newsletter relaunch.

As it turned out, we launched it during the month of a major software upgrade, several new products, major software tweaks, and right before securing a booth at the biggest industry show of the year.  Also, FREE t-shirts.

To say it’s a bit crammed full of information is putting it mildly, but I was up to the challenge. Check it out here to see how I did.

R.J. Sullivan’s latest book, Commanding the Red Lotus, is a novel-length collection of three space opera tales in the tradition of Andre Norton and Gene Roddenberry. His novel Haunting Blue is an edgy paranormal thriller and the first book of the adventures of punk girl Fiona “Blue” Shaefer and her boyfriend Chip Farren. Seventh Star Press also released Haunting Obsession, a Rebecca Burton Novella, and Virtual Blue, the second part of Fiona’s tale. R.J.’s short stories have been featured in such acclaimed collections as Dark Faith Invocations by Apex Books and Vampires Don’t Sparkle. R.J. co-hosts the Two Towers Talk Show YouTube program with John F. Allen. He resides with his family in Heartland Crossing, Indiana. He drinks regularly from a Little Mermaid coffee mug and is man enough to admit it.
View all posts by R.J. Sullivan →
This entry was posted in Uncategorized. Bookmark the permalink.